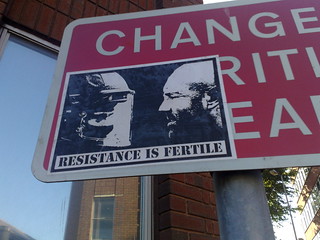 But I DO see a deep anger at injustice in the reaction to their getting in.Â It’s way, way more than just tribalism and a sense that ‘we’ lost. After all, LOADS of us on the left were wholly uninspired by the Labour Party, and disgusted by some of the UKIP-pandering rhetoric. But we’re under no illusion that a Tory majority is pretty much the worst of the range of bad scenarios on offer.

36.9% of the Â – sorry, those who voted – that’s who [as pointed out in the comments, it’s 24% of the eligible voting population…]. They read about the undeserving poor in the newspapers, they see stories of fat-cats in the public funded NHS, with the implication that the scrutiny of ‘the marketplace’ will bring efficiency. We know that’s horseshit. We know it. We see it and we ‘divine it by conscience’.

But our confirmation bias is as strong as theirs. We don’t understand the justifications for what to us just looks like naked selfishness. And it IS selfishness. In the truest sense. It’s me and mine, but it’s me and mine because the message about ‘them’ is that they are work-shy scroungers with 26 kids making Â£200K a year in benefits… The mis-reported exceptions that becomeÂ the imagined rule. The freak cases that Osborne is happy to point to as evidence of the abuse of the welfare state, when he dismisses questions about suicides in direct response to benefit sanctions with some bullshit about ‘not commenting on individual cases’. Unless that case serves his cause, of course.