Like many other people, I was deeply concerned when at the beginning of August, The Daily Telegraph brought it to our attention that many of the Chief Executives in the UKâ€™s biggest charities (specifically those that make up the DEC – Disasters & Emergencies Committee) were being paid 6 figure salaries, and that the number who were had risen sharply in recent times. Despite charitable giving falling.

It was of particular interest to me as a supporter of Christian Aid, that their Chief Exec, Loretta Minghella, is being paid Â£126,206 a year.

Thatâ€™s quite a lot of money for a charity that says that Â£21 could feed three families, suffering after the floods in India, for a month. That seemed to me like a better use of some of that money. Given that, obviously, it doesnâ€™t cost Â£126,206 p.a.Â to live in the UK.Â  In Christian Aid Campaign terms Â£126,206 could keep a heck of a lot of families fed for a month even in the UK!

However, Christian Aidâ€™s response was interesting. they pointed out that sheâ€™d taken a sizeable pay cut, from the Â£280K she was making before joining Christian Aid, and was thus pretty good value for money.

Well, that changed my mind, I can tell you! Why should someone who previously worked in Financial Services dealing with bankers have to put up with a drop in pay like that just because most of theÂ folk helped by Â the Charity sheâ€™s Chief Exec of are living on less than a couple of dollars a day? Itâ€™s an outrage.

So, my mum and I set up a petition at Greenbelt, which we dubbed Loretta-Aid, to get Christian Aid to donate half of the money they raised at the festival to Loretta, to help top up her ailing salary! After all, if she was used to a 280K a year lifestyle, the drop could have had a seriously detrimental affect on her…

Steven Buckley,Â head of communications at Christan Aid, asked to meet my mum to talk about Loretta’s pay.Â  He seems to think Â£126K is quite a modest salary for someone of her skills and experience.Â  Perhaps we should have asked him to signÂ our petition.Â HeÂ was also afraid we were going to stage a protest in the Christian AidÂ marquee andÂ upset the people working there, but why would we do that? They aren’t on a 6 figure salary; they are volunteers.

But, a sad thing happened. We couldnâ€™t get anyone to take us seriously. Everyone we asked to the sign the petition laughed! A few people signed it with fake names (unless there really was someone called Gandalf at Greenbelt Festival). We had a pretty poor list of names by the end of the festival, and as such, decided not to hand it in.

Hereâ€™s my mum with the petition outside the Christian Aid tent, deciding not to hand it in: 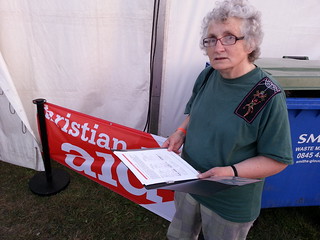 The only thing we could conclude was that for Christian Aid supporters, using their donations to prop up the sizable salaries of executives was not a good use of the charityâ€™s money. Indeed, many might agree with William Shawcross, the chairman of the Charity Commission, who warned in the Telegraph article that charities were risking their reputations if they were not seen to get a grip on boardroom excess.

So, perhaps a rethink is in order, eh, Christian Aid? Youâ€™ve got to do what you thinkâ€™s right, but even an argument as compelling as â€˜itâ€™s not as much as she got paid for paying compensation to bankersâ€™ didnâ€™t seem to wash with your supporters at Greenbelt…

Here are Christian Aid’s various responses to the topic:Â